We recently had the opportunity to pop over the state line to visit Daryl’s House, a live music venue and restaurant in Pawling, New York. Not only did we get to sample some of the new dishes they recently added to their menu, but we also got to sit with DARYL HALL!! We asked him a bunch of questions and ate a lot of good food. Thank you rockstar gods for granting us this O.M.G. life moment.

It began with Live from Daryl’s House, a show where Daryl Hall has musicians over to his home; they eat, they jam, and they broadcast the whole thing live. You’ve probably seen it, and if you haven’t, YouTube it, but be prepared to do nothing else for the rest of the day, you’ll be hooked.

Daryl built and opened Daryl’s House Club nearby his home in Pawling in 2014, so he could record the shows there, in a similar setup to his house. He also wanted to offer live music and good eating to the public. We’re so glad he did…it’s such a great place! We’ve both been a few times and have seen some of the best live shows there, including Howard Jones last year which was AWESOME!! Check out the calendar of upcoming shows and go catch some excellent live entertainment, while you wine and dine. Nothing better than that!

We can go for that. Ahhahhh? Yes, can do? That’s the only time we’ll attempt to weave Daryl Hall & John Oates song lyrics into this post. Promise. Continuing on…

Daryl Hall and John Oates have been recognized as the number-one selling duo in music history. Ponder that for a second…

Now, true story. When we told Daryl that we would both be recording the interview because, you know paranoia, and it’s best to have a backup, Daryl told us he completely understood the power of the duo. Did you hear that readers?? Daryl Hall likened Unlocking Connecticut, to the most successful duo ever! We die.

Describe Daryl’s House to someone who’s never been.

Daryl’s House is a musical and culinary experience. You’re never away from the stage and the music no matter where you are. There’s no 4th wall in the theatrical term. The stage and the audience are one big thing. It’s a rustic and comfortable place, my version of what I like aesthetically.

Daryl’s House just celebrated 3 years – do you think you’ll ever expand to another “house” as this one has been so successful?

Yes! But not around here. I live in Charleston for part of the time, so I’m working on starting a second one down there. And then onward and upward. I think the next logical one would be Philadelphia at some point. Maybe the West Coast. I’d like to have about a dozen. 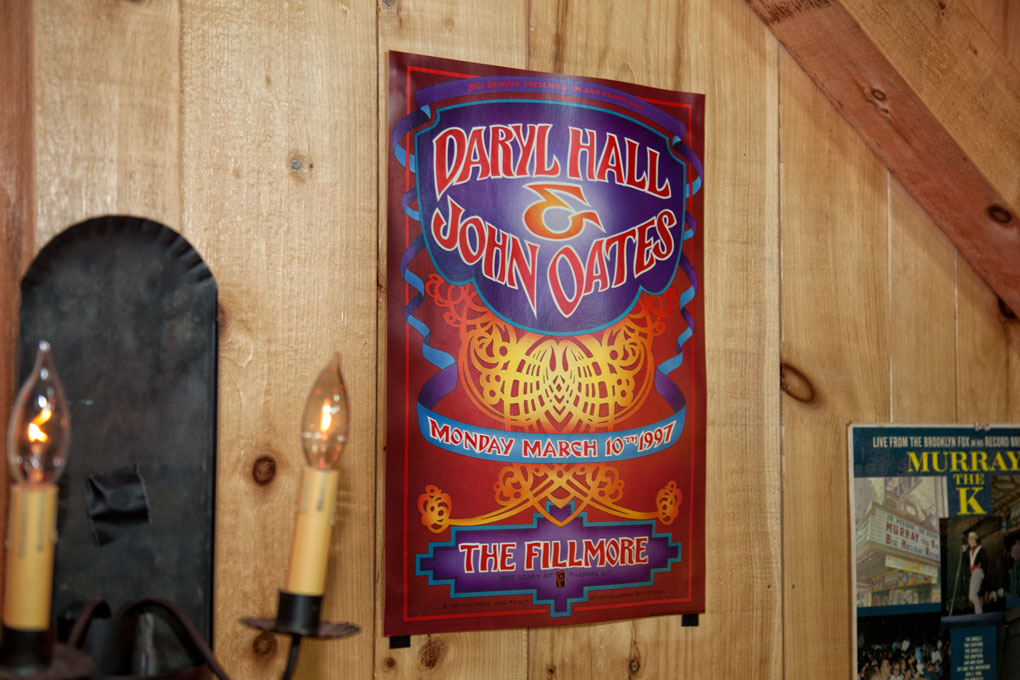 What’s your favorite dish to have here?

I have a lot of my own dishes on the menu, but my newest one is a lamb tagine. I cook Moroccan food, among other things. It’s my own recipe.

What are your most memorable moments in your career?

There are so many memorable moments. I remember the first time we played in Europe, that was a good memory. I remember stuff that I did with John in the 80s, like Live Aid, that was certainly memorable. A lot of these Daryl’s House shows are very memorable. There are a million moments.

Most rewarding part of doing Live from Daryl’s House?

Meeting people that I respected over the years, some of whom are friends and some of whom I met for the first time. We never know what’s going to happen. We don’t rehearse. What you see on TV, that’s it. We don’t sit around and bang this out. The band, they learn the songs, and they do their homework. Then, when we get together the cameras roll and that’s what you see.

How do you choose the guests on Live from Daryl’s House?

All kinds of ways. Availability has a lot to do with it. I have a busy schedule like you wouldn’t believe, and all these people have their own busy schedules. So, it’s trying to coordinate all that and get them up to Pawling, NY!

What’s next for you – what’s coming up?

I have a couple of scattered dates between now and New Year’s Eve and then I’m going back into production for Live from Daryl’s House so I’ll be in this area for a while…I absolutely love doing that show. It’s the best thing that I ever did, really. Then I’ll be going back out on the road early spring.

Ready? It’s the rapid-fire-question round!

What are you doing on your best day? Reading a book.

Success is ….?  Being outrageously busy.

What posters did you have on your wall as a kid? The Temptations.

What websites do you have bookmarked/what do you read daily?  I don’t really read websites daily but house building supplies, that kind of stuff.

Name a skill or a talent you wish you had?! I wish I could put my creativity in a more linear way and write a book.

If you could have 3 guests to dinner, who would they be? Some of my ancestors, I’d like to meet them.

What’s in your rider? Anything like white roses or blue m&ms??? Neither one of those. All kinds of strange things. Green tea, cheese, and certain Bourbons. That’s what I pay the most attention to.

When you’re not working or touring, what are you doing? Recovering. There’s very little downtime in my life. I go down to Charleston and I try to sit in the sun, or up here. Really I just chill out. That’s downtime for me.

What are you reading right now? I just finished reading an extraordinary book by a very close friend of mine, Bernard Cornwell, who is a wildly successful author. He’s the guy that wrote the stories that The Last Kingdom are based on. He’s written a historical novel about the origins of Shakespeare’s plays. It’s a really unique and good book and I recommend it. It’s called Fools and Mortals.

And that’s a wrap!