When we were in NYC for Fashion Week, we asked Ellen Christine, couture milliner, if we could stop by and try on hats and ask her some questions for Unlocking Connecticut. Ellen was more than happy to let us come and have the afternoon of our dreams – trying on ALL of the most amazing headwear!

Ellen’s hats have been spotted on the heads of some greats, such as Lady Gaga and Beyonce, and in many magazine editorials such as Vogue and Harpers Bazaar. 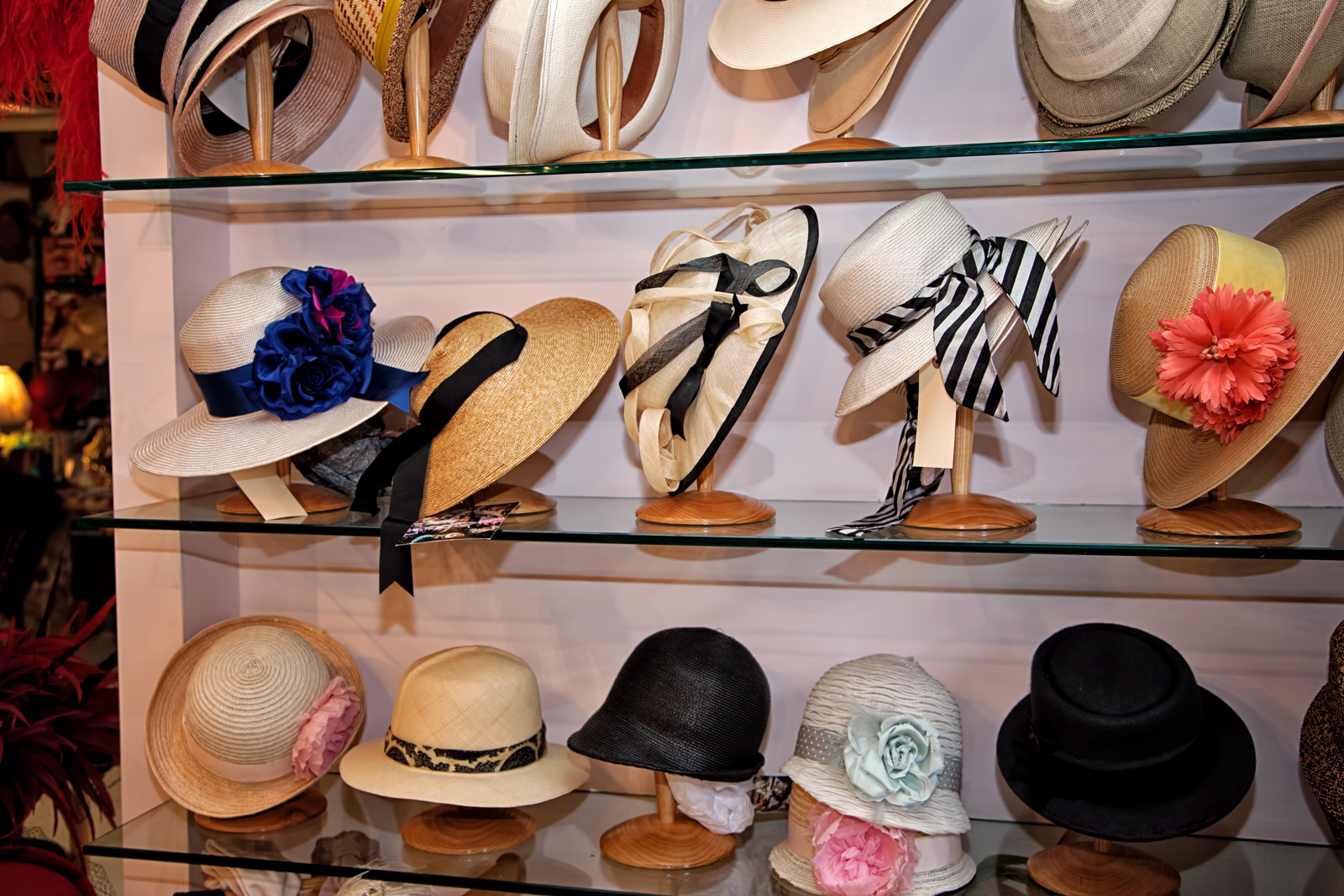 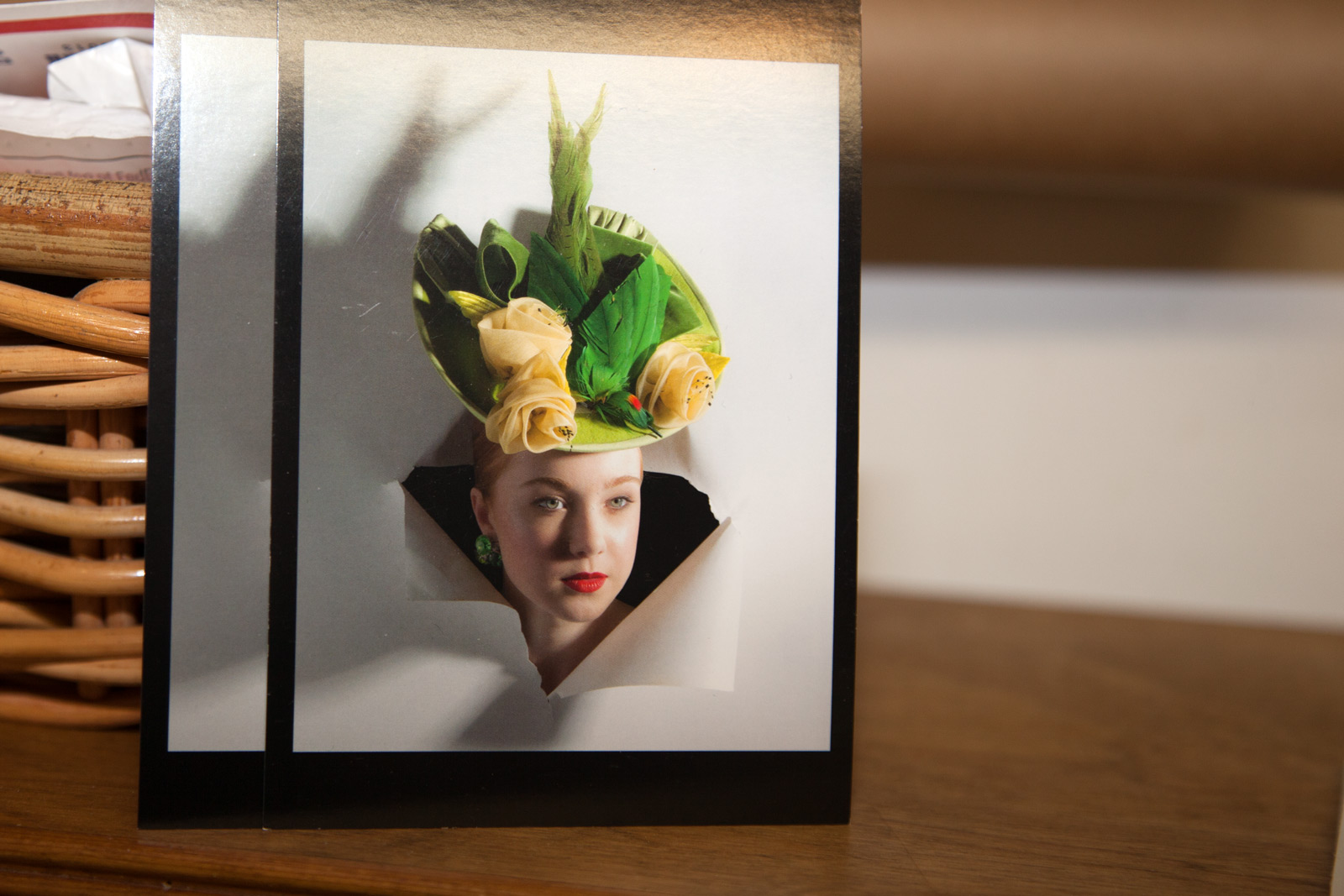 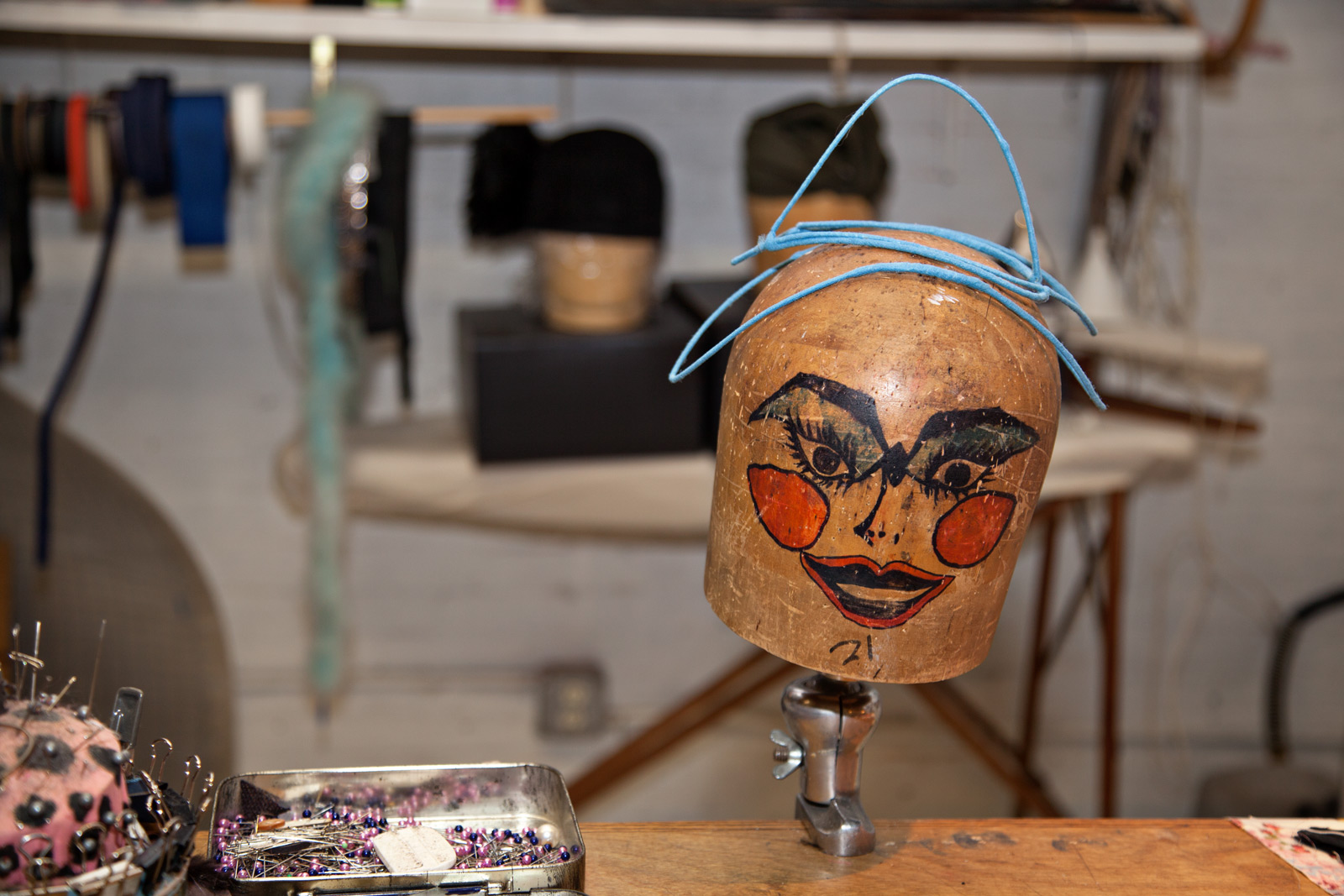 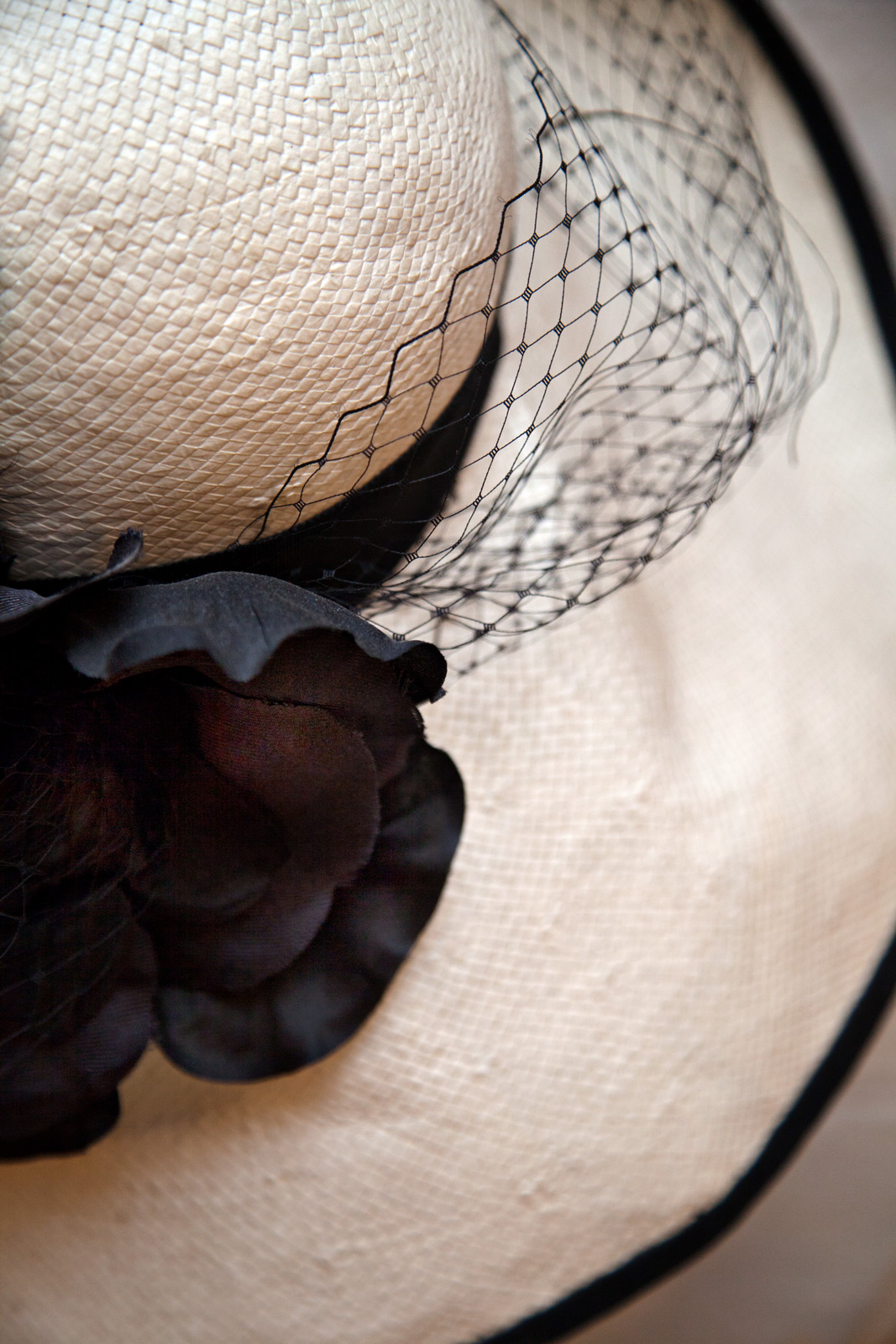 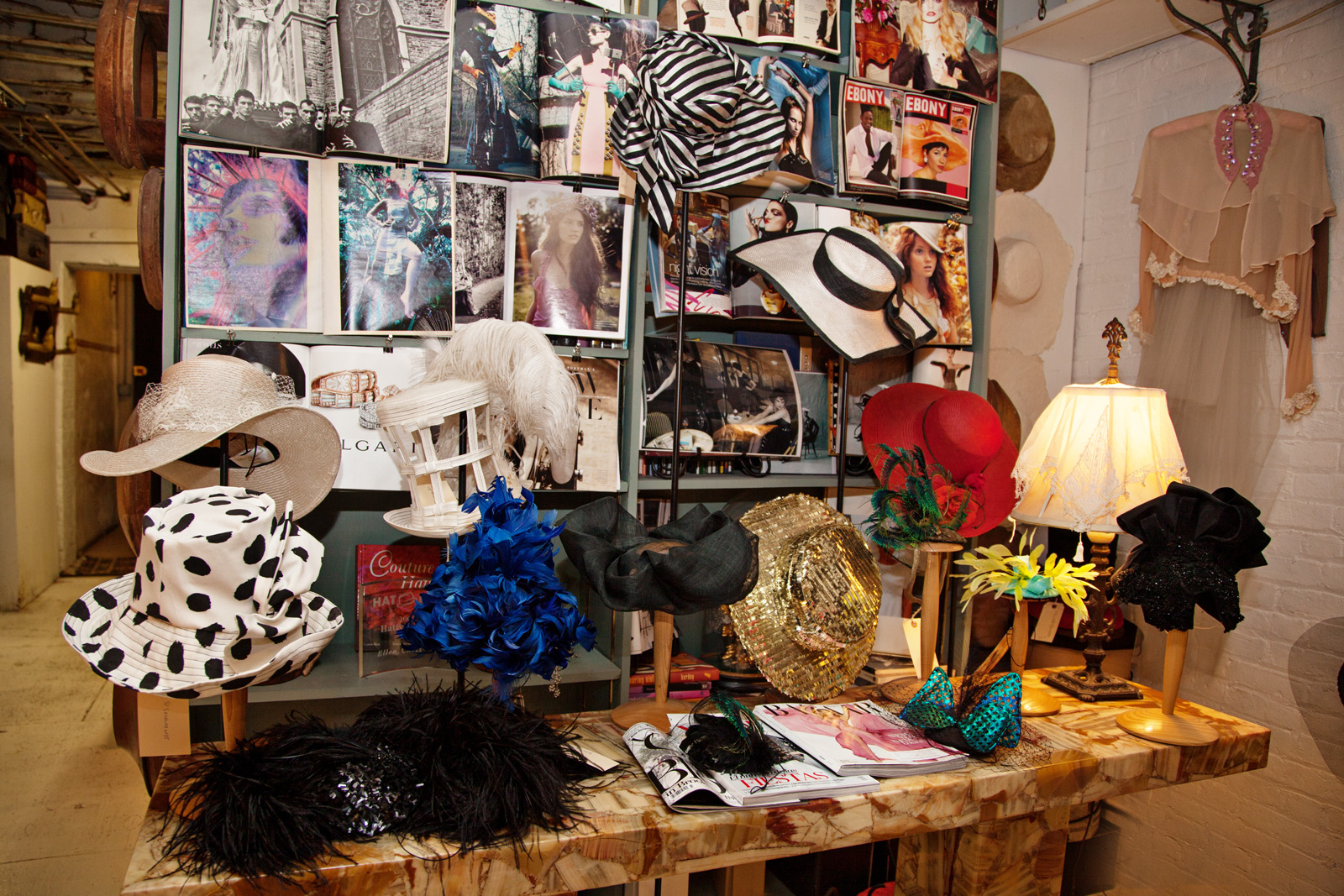 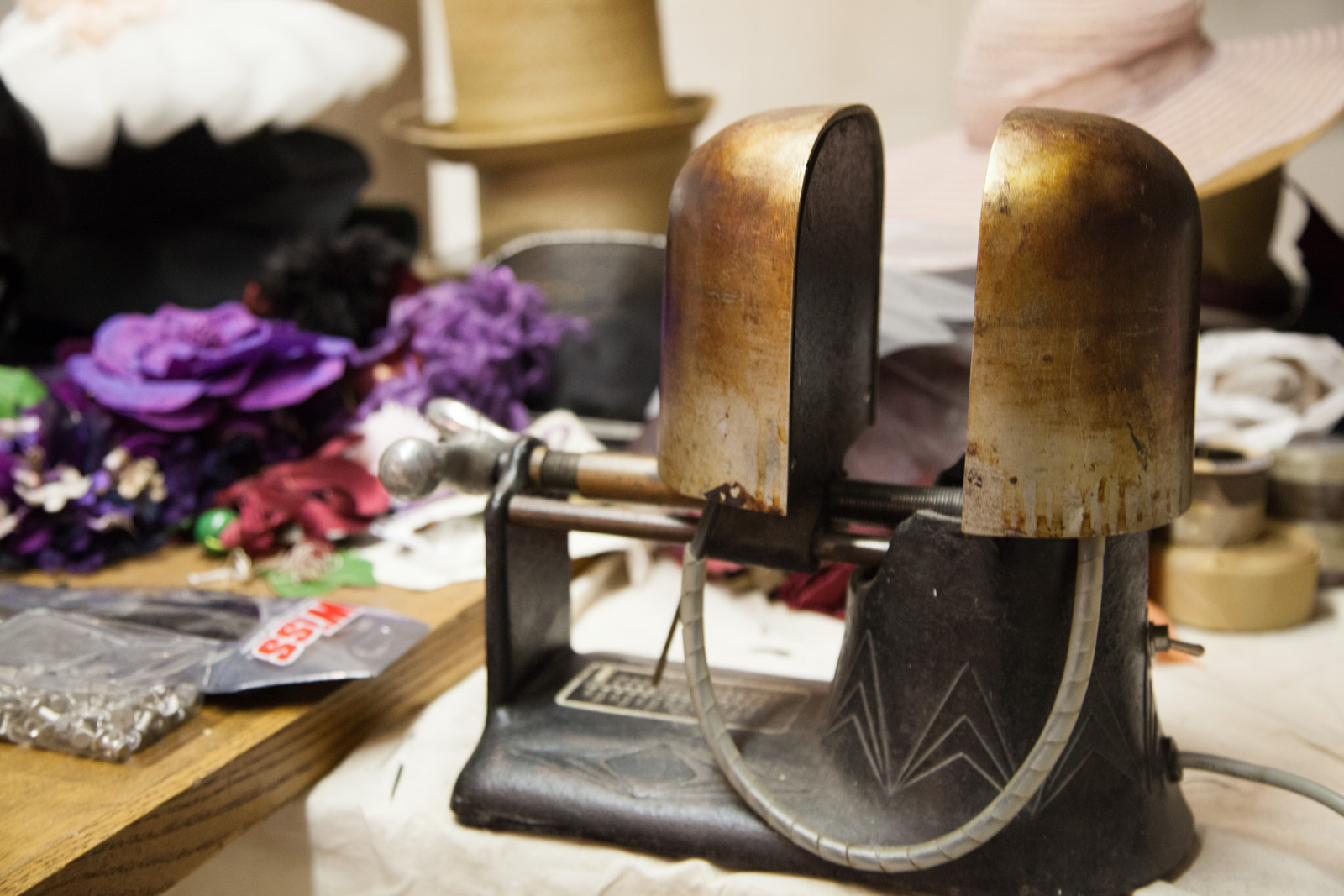 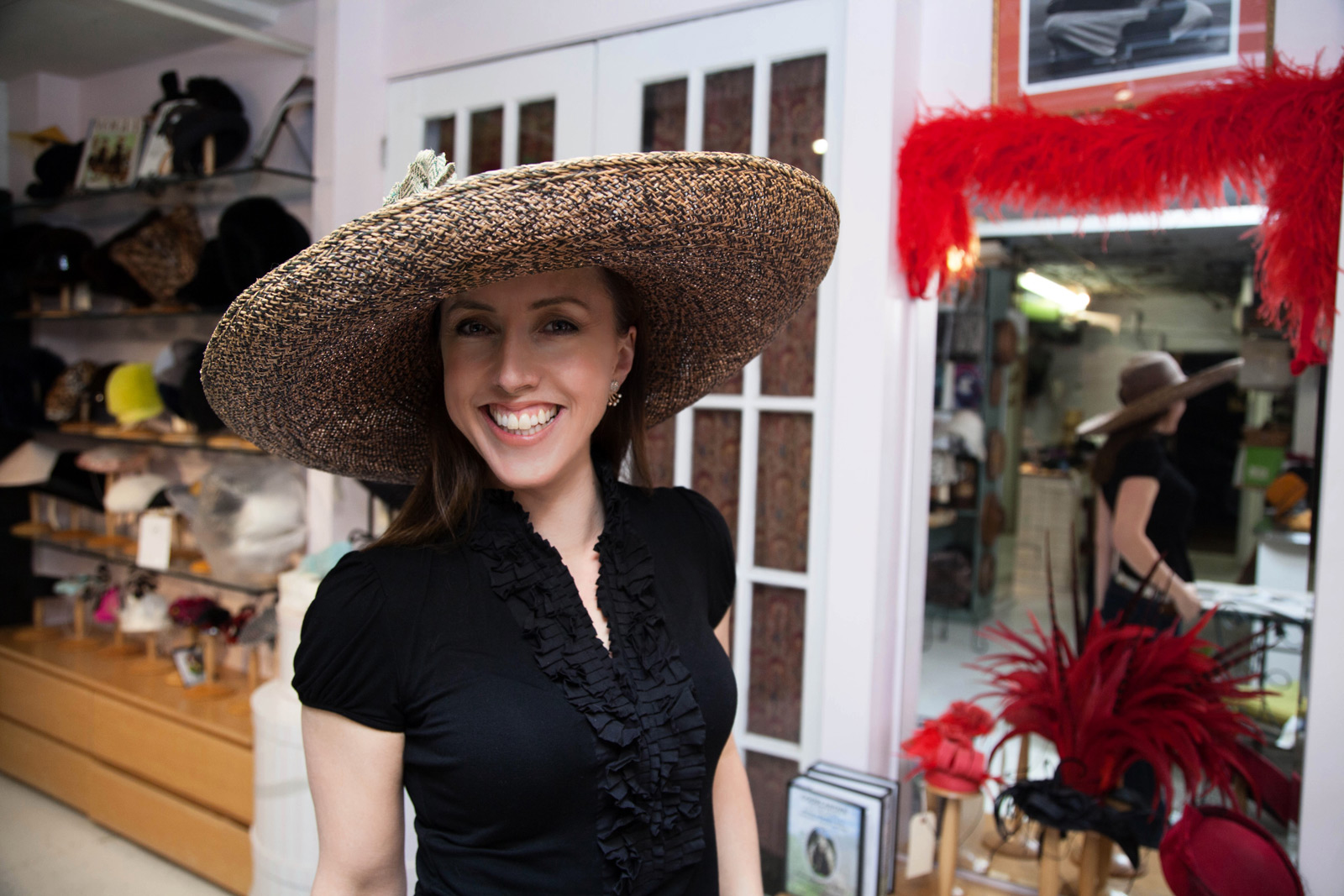 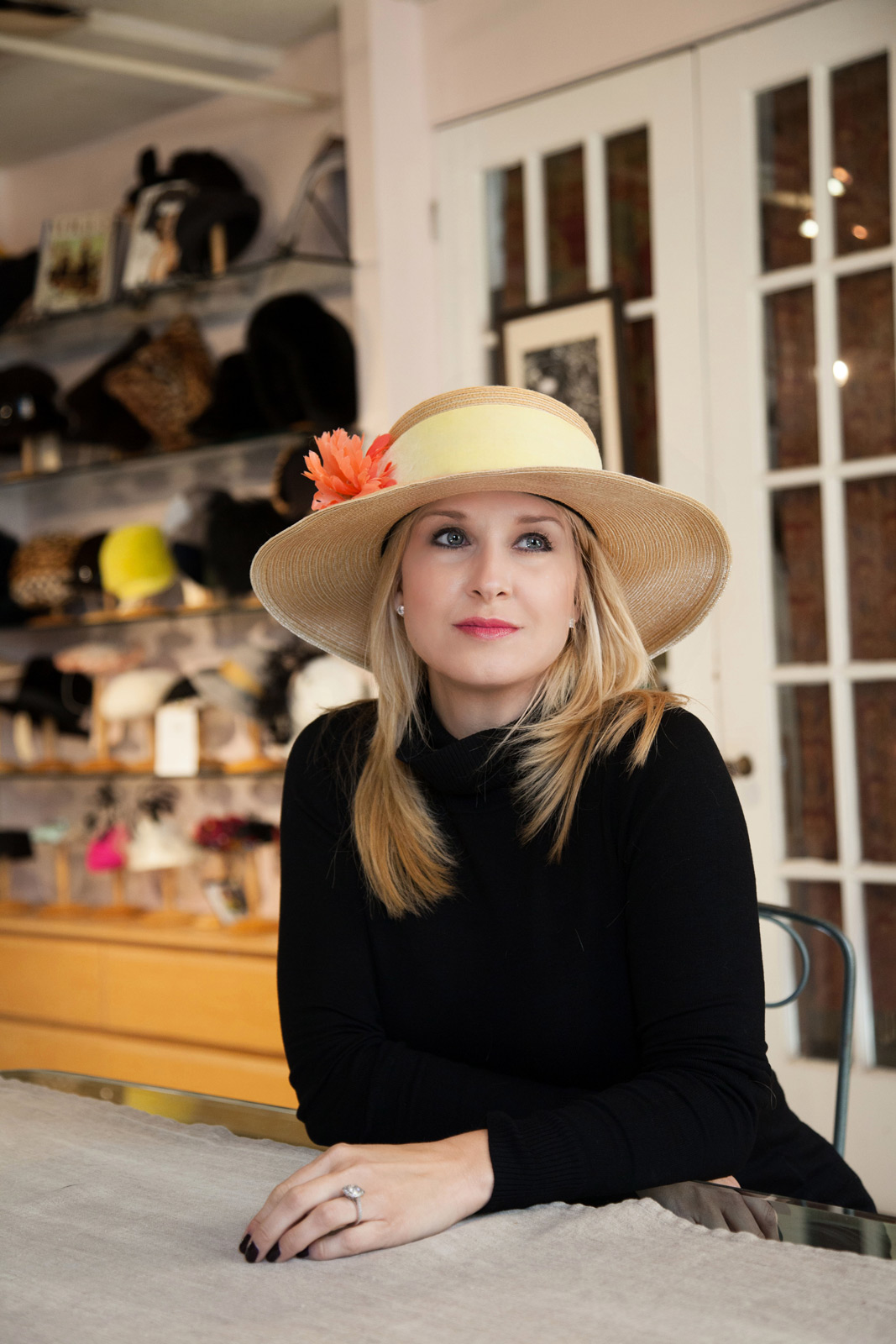 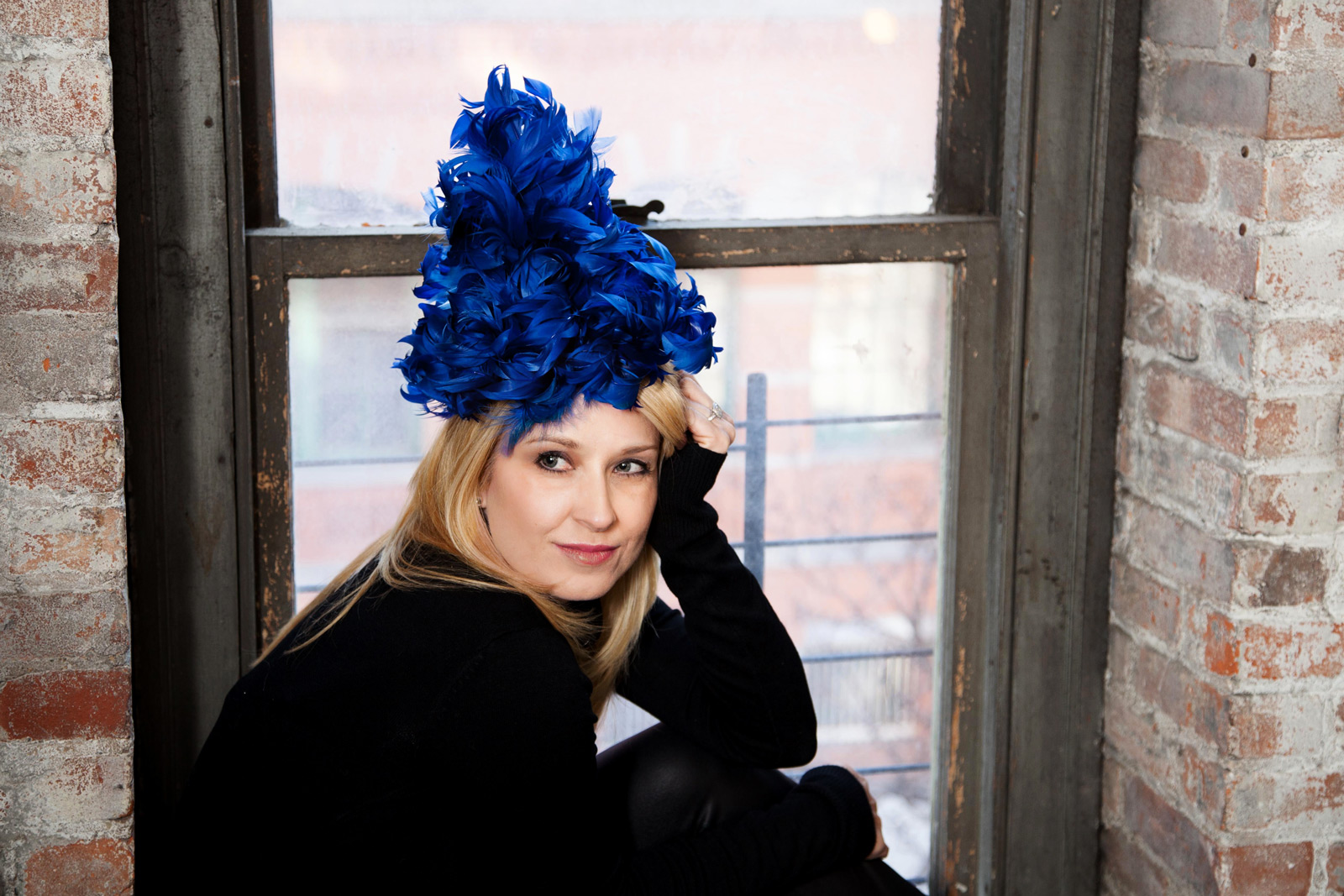 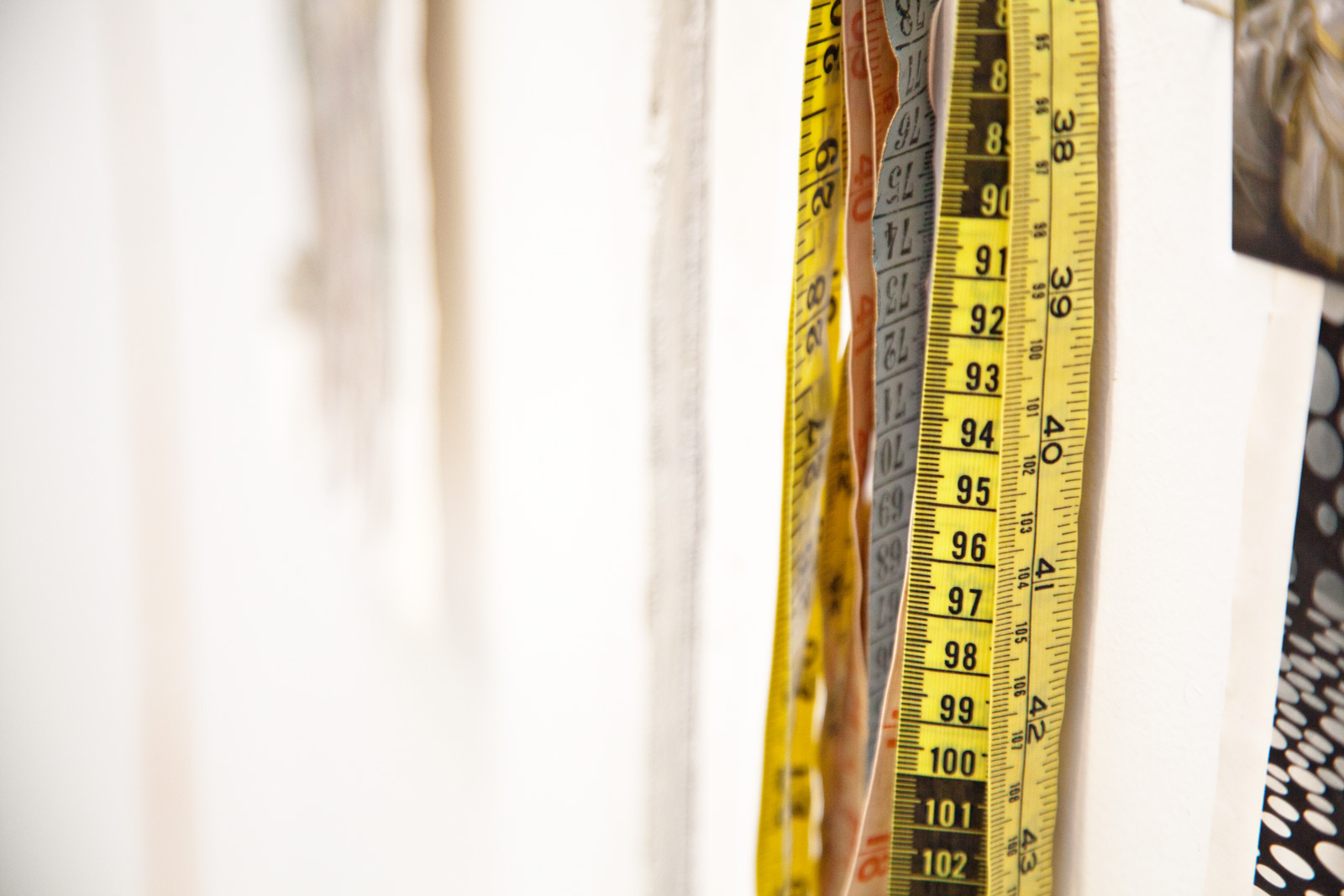 The first words from Ellen when she greeted us at the door were, “Why are your heads naked?” “Where are your hats?” Ellen’s parting words were, “Wear more hats.”

It’s true – everyone should wear more hats! When asked why we weren’t wearing hats that day, our answer had been, “Because they would fly off on a day like today” (it happened to be the most freezing and most windy day in the history of a long time). Ellen replied, “Only if they don’t fit you properly!” Hmm, true.

Enjoy our hat show, then check out our interview with Ellen Christine.

The first hat Ellen picked out for Lora was this green number. [Lora’s note: So mod…..love it!]

And this one for me…

[Lora’s note: (above and below) Perfect for a royal wedding, no?]

[Lora’s note: I’ll just dream of Ascot or the Derby….]

How did you get your start in millinery?

I was working on some plays as a costume designer, and the director and the producer ganged up on me and called me, and said, “By the way, could we have a piece for tomorrow?” It’s 10 o’clock at night, and the “piece for tomorrow” is a gladiator’s helmet. I made it; I invented how to make it, and came up with something that worked, and thank God it was a comedy. So it worked, I had just made this entire gladiator costume for this guy who was 6’5,” so no matter what you put on him, it was going to work…and then word got out.

At the same time, I was working at a company called Uptown Strutters Ball, in Boston. It’s now called Bobby from Boston, and I was running his restoration and costume shop, and he bought an estate of…oh gee, I don’t know how many pieces. It was one of those stories where an old lady is abandoned in her 57-room mansion by her family and every room was filled with a different category. This one was gloves, this one was fur coats; floor to ceiling in stuff…and he brought back hundreds and hundreds of hats…gravity had not been good to them. In their boxes they were all squashed…so I took pity on them, took them all apart, put them back together again, and that’s how I learned how to make hats.

Around that same period, a girlfriend of mine and I were wandering down the street in Paris…we went into this accessories shop and they didn’t have any hats. They said they had been looking for some…so I brought over about 150 hats to them and they all sold within a month.

All of those things together is how I ended up being a milliner!

What would you say was your first big break?

I’m very, very, lucky and stylists and magazine editors and people who do books and films are very kind to me and very generous with exposing my work…and I love doing pieces for them. If you had to put a time line on it, when I opened my store in 1995 I was “discovered” by Nicoletta Santoro, and she put me into Italian Vogue – and that was the 1st big break. Nicoletta was the editor of Italian Vogue at the time.

What has been your favorite project to date?

I think this year, it’s been for a client named Joy Marks, we did an extraordinary composition for her. It was a combination of hand painted silk flowers and 1920’s postcards from China which were backed with artwork by a calligrapher that has work in the Metropolitan Museum of Art. It was an incredible art piece that we did for her and it came out really astounding. It took months to make.

Whose fashion sense inspires you?

They’re all dead. Empress Eugenie was the woman who started fashion blogging because she made it popular to wear different things from different designers…and then people started doing sketches of that, and then sending the sketches around the world, with commentary.

Certainly, Elsa Schiaparelli, because the woman was wacky, edgy and couture all at the same time. I really love what Schiaparelli did with the surrealist artists.

And Lilly Dache, who was the largest milliner in the country…in the world, for a long time.

Anyone alive/current that you admire?

It’s always going to be Stephen Jones…he’s my darling. I love Stephen.

Do you have any desire to go into clothing?

Not really. I did that when I was designing costumes…hats are faster than ball gowns, you know? And I work with designers that do clothing. I think this is the niche that the world has carved out for me, and so this is where I should be. You know, tiny, little, non-sensical things on your head!